Edwards and the Power of Words and Images 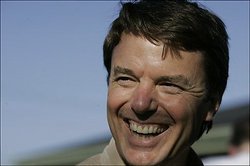 Spent the early part of the morning going over the media tempest that is John Edwards’ Announcement (tho it had already been “announced” on his website yesterday). I read the email that Edwards sent – and watched the video at YouTube and was intrigued by the frankness that Edwards showed. He has learned a lot from the 2004 Campaign and seems to have taken the time to invest in infrastructure (his suite of sites is one of the most complex and intertwining – I will have to do a post on this issue) and connecting with the voters on the red meat issues. But it seems as though he has not gotten off of the standard playbook of Democratic politics.

It’s About Vision and Hope, not Dispair and Dismay
It is funny – I watched Edward’s video at least three times – and as I relistened to it, I began to hear the words that Edwards was aiming for – he has taken John kerry’s National Service doctrine (which I and others are majorly in favor of) and built One Corps. But, in the first listening to the the video, I felt the sadness and disappointment in our country’s efforts – the loss of honor, moral certainty and other failures of the previous administrations. I kept looking for the positive – and seemed to hear it in the concept of “making change happen locally”. On all of the esoteric global issues – I heard good phrasings – but was not inspired. I did not feel the leadership that I see when I look at the Clinton Global Initiative. While these is a sense of corporate gloss at the website, there is still a sound of hope and results that I hear in the written word on their site. OneCORPS has a terrific agenda and drive, but the marketing language needs to be tweaked in the right way.

And, not to suggest that the Republicans are right – but reading Washington Whispers from earlier this month, I was somewhat impressed with Frank Luntz’s critique on the Repubs problems and what they can do about it for 2008. While I could easily see this as a marketing message for the Repubs to use to recapture the House and Senate, what I do see is the seeds of cooperation that could actually effect real change in government. The focus on “stewardship”, “vision” and “results” – these are things we (as the electorate) hunger for. I would rather elect a person to Congress for what they can bring to our future, not to slap down or punish another person. Someone told me that it is about adding positive energy, not negative. I would suggest that Edwards and others start talking in the tones of Clinton and Reagan – lead with a vision, a majestic honor (not too syrupy, please) and then follow with how things are wrong, why they are wrong and how to fix them.

Granted, being an engineer, this has appeal to me – and it is funny, just writing this post reminded me of the article in the WSJ on the differences between Chinese politicians and American politicians – engineers are often focused on solving the problem, politicians are focused on mitigating risk so much so that they sound like they are equivocating. John – draft a vision, build upon your OneCORPS with sound experiences and a plan and then you can see what happens next.