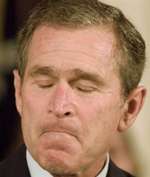 After a long silence, this last act by Bush has left me with a shaking head and sad heart. I worked hard to elect a real Democrat last cycle, and JK did not win. I hope that the travesty that is this Administration can be stopped.

Is this the Republican way? Lie, obfuscate, delay and play games – and then, at the last minute, get a “get out of jail free” pass? Someone, please tell me this is a dream.

What a shocker (yawn). President Bush announced, today, his decision to commute the 30-month jail sentence of criminal fibber and erstwhile best-boy to Dick Cheney, a.k.a. “I’ll-show-you-my-rap-sheet-if-you-show-me-yours” Lewis Libby.

The pathetic aspect of this disgusting travesty–I mean the Bush Presidency, not the Libby case–is President Bush attempting even in this announcement to run a PR scam on the American public.

What is it this time? For some reason, President Bush–who has the power to commute a sentence for whatever reason he chooses–wants the American public to believe that he “weighed” the circumstances and arguments of the case and came to a sound conclusion–as if hidden in that brush-clearing head of his there lurks some kind of judicial mind.

Is there anyone–anyone, that is, besides the terminally brainless Tucker Carlson–who actually believes that Bush plucked “I-know-all-the-dirty-secrets-that-can-bring-you-down” Lewis Libby from the iron jaws of jail for any other reason than, well…to make sure he keeps his lying mouth shut on the encyclopedia of felonies and crimes committed by Bush and Cheney?

Please, will Congress do the right thing?

This entry was posted in Political Thoughts. Bookmark the permalink.