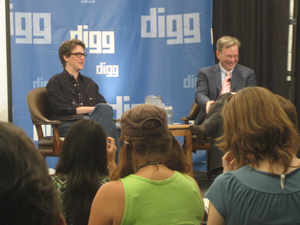 RM: For the last twelve years, the comments have been – this is the Year of the Internet. Well, is it this year?
ES: I am one of those people who have been saying that the outcome of the election on the margin would be from the Internet. And, in 2006, I think the first step happened. Remember the George Allen and the macaca moment which caused the switching that seat and turned the Senate which, in turn, turned the tide against the Bush Agenda.

The second step got started 2.5 years ago – prior to then, there was no way to be a legitimate challenger in the Presidential election and invading the media without coming in “sideways”. Obama with a small team and via various media channels has been able to become a “real” challenger.

RM: What else can the Internet be (from google’s perspective)?
ES: Truthfully, we think about how you can live on the Internet – all the time. We think about changes in the power structure. We knew that it was obvious that this group did not have a seat at the table (which is why we helped with Big Tent Denver), but here is the chance to connect. At the convention, there are 12 different layers of security, which makes it incredibly difficult to access the Convention. Why not use 3-D Tech? Posting yourself on YouTube – allow yourself to be seen by your friends and family. Trying to get it to the point where if you want to know, the information is easily readily available. Challenge is getting the data from the mainframes to the Internet storage.

Britney Bonet, Product Manager: stay consistent with making the world info universal – polling information and registration. Using google maps to find their information – right now, it is a maze to find the info.

RM: Repubs – make it difficult to vote, Dems – make it easy to vote. Are you siding on the Dems side?
ES: No – it is about getting people to vote. People are saying “It doesn’t matter” but with the tools are able to help. The Right to Vote is important.

RM: There seems to be two worlds that we (as citizens) have to stride simultaneously – in googleLand – we have gmail, gChat, google Maps, google Finance – a lot more information known. On the other side, there is the “secret effort” by our government to spy on us.

The fear that is coming out is that the concentration of information that google has on us, can allow the government to be a lot more evil than it could be without google. Is it up for google to resist government efforts?
ES: Well, to be clear – they have guns and we don’t. The reality is: we are required to follow US law and there is no other answer. The good news is that we have a court system and judges – and if we get an over-broad request, we can get a federal judge to constrain. google operates on the first principle – protect our users privacy. We do worry that, as this information gets collected, this is a treasure trove – we worry that the government could go after the info. Not new, in the 1950, the FBI did this as well.

R: Maybe google has the biggest database, but BOY do I love google Documents – and so, we are willing to make that tradeoff. Eventually, competitors will compete on service sans the privacy issue.
ES: One man’s privacy argument is another’s terrorist argument. google is not in the position to make that decision. It is as much a cultural decision as a legal one. For example, in the UK – there are more CCTV camera in the UK than any other country, ability to read lips – can yu use the technology to track what people are saying?

RM: What about China?
ES: The Great Firewall of China – they can arbitrarily turn on and off the firewall – it is so restrictive that ES can not even explain the laws. We faced a choice – 1.3B community on the other side of the wall. Would they be better off to have google under the law or not? We made changes to demonstrate how we think.

Rough summary on the law – if you say “Fellen Gong” – it is removed. So we made, on the pages they wanted removed, a page that says “This page has been removed”. So what do you think the Chinese do when they see that page? More than likely, the Chinese find ways around the blocks. It has been so successful that the local competitors have done the same thing.

RM: You can run countries online now – state and local governments are trying to move their functions online. Do you worry about cyber-war?
ES: Well, we just had one with Russia-Georgia with DOS attacks. Questions are who did it – but it is a very real threat. The Internet community as a whole is worries about it – but the Internet is so redundant that it would be difficult to shut it down. The tools are getting pretty good now to cover the issue, but we will need to be vigilant.

RM: Eisenhower selling the interstate system we needed it for national security. Ability to move through the online world – it is part of our infrastructure.
ES: Internet – DARPA: computer science proposals, put war metaphors around it – and there is a long history of putting money into the military-industrial complex – we benefit.

RM: Is google a defence contractor?
ES: In a strict sense, no. But we more than likely have sold search appliances.

RM: How much does google reflect America?
ES: The view outside the US is that this is American hegemony. The values of America are not the same values to the rest of the world. Google is American – and outside America, people would say we are very much representative of America. 1.5B users on the Internet – China just topped out America. English is slightly ahead of Chinese. US is the small part of Internet activity. Another billion users will use mobile phones – and we shall see how things change.

RM: Your reaction to: “The Internet is a bunch of tubes” – what did you think of Stevens characterization?
ES: There is always a person who is first and another who is last, and we found him.

Audience Questions:
David Horn, Mother Jones and CGPolitics.com – what is your opinion on McCain and the Internet? And what about journalism – your concern about investigative journalism? How can google help that the economic rug is not pulled out from under us?
ES: Journalism – major national crisis now. You just worry as a citizen that it will disappear. Newsprint is expensive, shift of ad revenue, classifieds revenue. We do not know – we are working hard to try things. google News has been very, very success to driving traffic to site – working on tech to increase revenue. The online news sites are not driving the same level of revenue. Best way to demonstrate – how do 20-somethings get their news: online. We need to develop an appropriate.

Online news is often so targeted that you miss out on the news you might learn about. By reading your blog, people are learning

Cheryl Contee, Jack & Jill Politics.com, social media consultant – concerns about the hiring practices at google. Diversity issues?
ES: happy with our recruiting policies – we have an aggressive hiring program for all. In Engineering, compared on gender bias. Discovered problem and fixed it. They have enough info on the analytics and changed the program. In the Afro-American and Latinos, very small set that the data is not available. Diversity is the answer – needs to reflect the world.

Dave Freedman – signal-to-noise ratio on the Internet. Isn’t it google’s mission to remove the clutter, or to figure it out?
ES: one man’s clutter, is another’s pesto. 13 hours of YouTube content is being uploaded every minute. Every time we do a ranking, we try to declutter the content. Computers and algorithms can help declutter the Internet. We take that as our mission.

??: google going to help make sure the polling machines are effective?
ES: Alot of analysis that small changes would make the situation not correct. Gov’t action has suggested that there is no problem. A small change would correct this problem – paper record. First case: citizen activism – we have to be careful on drawing the line – google is not in the place of investigating issues.

Fraid Benevor – Internet is about building communities. How will government help build communites?
ES: Fastest broadband Japan, 2 is France – all is based on government policy. People with broadband will likely do policies. With the FCC – need to open up the mobile bandwidths. Other industrial policies to get credits – best solution would be access to broadband.