Mayor Bloomberg, would you consider “Secretary of National Infrastructure”?

A friend and I were talking about Mayor Mike Bloomberg’s efforts for a third term in New York, and I was surprised to hear a refrain from him about how Mayor Mike could be better applied to the needs of our country, in a position other than the Mayor of New York. The following letter is provided as a thought piece – in case some of Mayor Bloomberg’s political people are reading:

Mr. Mayor, let me tell you that I have been an unabashed fan of your work – transforming your little three-person company back in Jersey into one of the pre-eminent financial systems, your work as the Mayor of New York in rebuilding and growing its economy and education system – and I am supportive of you running for another term as Mayor of New York, as long as other competitors (like Bill Thompson and Congressman Anthony Weiner) were to jump in. But, a number of my politically-minded friends are somewhat upset with the method of getting a third-term and were hoping you would possibly consider a different path of civic involvement other than a third-term for New York City.

You were the first national leader to come out and deplore the state of our country’s infrastructure and you have been tirelessly campaigning to wake people up to the pending catastrophe of crumbling Federal highways, an outdated electrical grid, non-existent, carbon-free public transport in most major metropolitan cities and our dwindling ranking for broadband penetration among leading industrialized countries.

All of these infrastructure challenges constitute the roots for any future economic growth – we would be very well served to have someone as yourself at the helm of a Cabinet-level position overseeing private/public partnerships to redesign and overhaul America’s infrastructure.

We are living today with the legacy of previous generation’s investment in our national infrastructure (e.g. Eisenhower’s Federal Interstate System, the railroad system from the turn of the Century that was privately funded, the TSA, the telecommunications system) and they are the primary contributions to our success that have lasted long past that generation’s lifespan.

Today, we are faced with economic issues that require more than another stimulus package, we require BOLD thinking beyond even a two-term Presidency. As Senator Obama pointed out on the Rachel Maddow interview, China is building the infrastructure for the 21st Century Economy – and we are not. We seem stuck in the 20th Century. 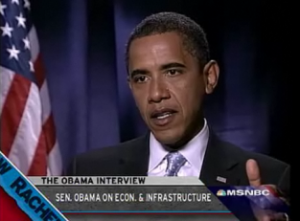 OBAMA: I think we have to rebuild our infrastructure. Look at what China’s doing right now. Their trains are faster than us, their ports are better than us. They are preparing for a very competitive 21st century economy and we’re not.

One of the most frustrating things over the last eight years has been the ability of George Bush to pile up debt and huge deficits and not have anything to show for it, right? So, if you’re going to run deficit spending, then it better be in rebuilding our roads, our bridges, our sewer lines, our water system, laying broadband lines.

One of, I think, the most important infrastructure projects that we need is a whole new electricity grid. Because if we’re going to be serious about renewable energy, I want to be able to get wind power from North Dakota to population centers, like Chicago. And we’re going to have to have a smart grid if we want to use plug-in hybrids then we want to be able to have ordinary consumers sell back the electricity that’s generated from those car batteries, back into the grid. That can create 5 million new jobs, just in new energy.

But, it’s huge projects that generally speaking, you’re not going to have private enterprise would want to take all those risks. And we’re going to have to be involved in that process.

Our country needs a leader who, as both a private industry champion as well as a public servant who has been tested in the largest megatropolis, knows the challenges that we will face with addressing this immediate need. You (and your team) are experienced in addressing the difficulties and successful techniques in bringing the public and private sector together for the Common Good.

Please, consider this an option as you gear up for your Mayoral Election. In my humble opinion (as well as friends who can not vote in this election), Mr. “Secretary of National Infrastructure” is your chance to make an even bigger contribution to America’s future.