Is the second canary signalling? You decide…

This morning, I saw an article that made my heart run slightly cold – which lead me to post it on my Facebook Notes. The response was quite intriguing that I decided to republish it here on my site.

So this morning, I see an article in the International Herald Tribune which made me stop cold (please, note the pun)

As temperatures rise, a greening of Greenland 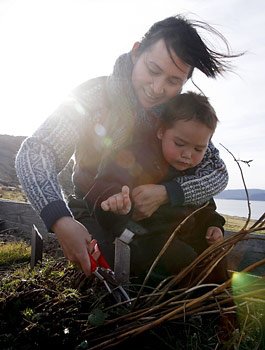 NARSARSUAQ, Greenland: A strange thing is happening at the edge of Poul Bjerge’s forest, a place so minute and unexpected that it brings to mind the teeny piece of land that Woody Allen’s father carries around in the film “Love and Death.”

Its four oldest trees – in fact, the four oldest pine trees in Greenland, named Rosenvinge’s trees after the Dutch botanist who planted them in a mad experiment in 1893 – are waking up. After lapsing into stately, sleepy old age, they are exhibiting new sprinklings of green at their tops, as if someone had glued on fresh needles.

“The old ones, they’re having a second youth,” said Bjerge, 78, who has watched the forest, called Qanasiassat, come to life, in fits and starts, since planting most of the trees in it 50 years ago. He beamed like a proud grandson. “They’re growing again.”

When using the words “growing” in connection with Greenland in the same sentence, it is important to remember that although Greenland is about four times the size of France, it has only nine conifer forests like Bjerge’s, all of them cultivated. It has only 51 farms. (They are all sheep farms, although one man is trying to raise cattle. He has 22 cows.) Except for potatoes, the only vegetables most Greenlanders ever eat – to the extent that they eat vegetables at all – are imported, mostly from Denmark.

But now that the climate is warming, it is not just old trees that are growing. A Greenlandic supermarket is stocking locally grown cauliflower, broccoli and cabbage this year for the first time. Eight sheep farmers are growing potatoes commercially. Five more are experimenting with vegetables. And Kenneth Hoeg, the region’s chief agriculture adviser, says he does not see why southern Greenland cannot eventually be full of vegetable farms and viable forests.

As someone who recently read and watched Gore’s Inconvenient Truth, looks like the second canary is signaling…

This entry was posted in Mitzvahs, Personal Thoughts and tagged Al Gore, canary in the coal mine, Global Warming, greenhouse gases, Greenland. Bookmark the permalink.