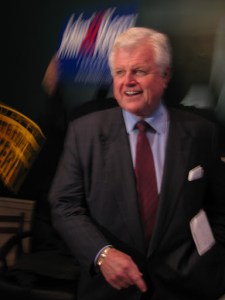 I have been watching the coverage of the passing of “The Lion” and thought of the two times I met the man.

Back in 2003, where I had joined the Kerry Campaign, we were in the DC office working away – and with the Dean Campaign having waves of good press and momentum, our office felt somewhat like a dead man walking. When JK brought on Mary-Beth Cahill, the office had an almost “game-over” feel – and suddenly, we were brought into the main conference room for a “meeting”.

As we were milling about in the room, suddenly – this enormous personality walked in with two dogs. I had never met Senator Kennedy before – and from television and other appearances, I assumed him to be a tall man like JK. This man was jovial, enthusiastic and here to raise our spirits.

He gave one of his patented “Kennedy speeches” which was designed to lift our spirits. And, truthfully, it did.

It is a shame to see a man with his legacy of service pass – but it is an honor to his memory that we commit to his work and carry on – beyond the short time he was with us on the earth.