Politics in a World of Social Data – who knows what about whom?

Originally cross-posted from The Social Engineer: 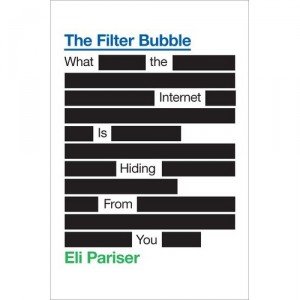 This past month, I have been reading Eli Parser’s “The Filter Bubble” on my iPad Kindle app – and I must say, Eli has done a bang up job of discussing the impact the Filter Bubble can and will have on our political and intellectual discourse.

As I continue to work on the problem of “influence marketing”, it brings back concepts of control theory to mind, and how tuning the inputs to a system can probabilistically ensure a bounds on response. And, as you begin to learn the “modes” of the “system”, you are able to generate more desirable performance from the “system” overall.

Eli uses the phrase “persuasion styles” (from Dean Eckles at Stanford and Facebook) which discuss the modes on how a person can be influenced to perform an act/action based on how the request is made, not simply by the content. And with so much Social Action data around on the web (and purchasable in large batches from companies like GNIP and DataSift), the ability to sift through the voting records, demographic records and Social Action records will be a powerful mix.

So what is “influencer marketing“? As I described in an earlier post, some circles consider the measure of influence corresponds to your perceived expertise in a particular topics or arena. It harkens back to the old E.F. Hutton commercial, “When E.F. Hutton talks, people listen.” But in today’s world of social media focused on driving action – and advertising dollars being spent to drive purchases or brand impressions, influence marketing becomes more of a word-of-mouth advocacy concept – who is able to drive actions from whom by creating reciprocal or responsive actions to the original action.

In Control Theory, we would call the original Social Action an “impulse” and then see what “modes” get “excited” (e.g., vibrate, resonate). This processes is known as System Identification. And while most “systems” are considered from a single-input/single-output (SISO) model, we know that we are bombarded by “impulses” from all sorts of sources (e.g., TV, adverts, Facebook shares, retweets, LinkedIn updates).

And, the “system” (e.g., you and me) are not static linear boxes which are “time-invariant”. We are impacted over time by external factors like weather, emotions, concerns, location, etc. So the linearization of US to determine the “impulse response” has potential for a great deal of “modeling error”. But in a probabilistic world,we can come up with linearized predictive models that help in the likelihood of understanding a “system’s” response to an “impulse”.

How will this help campaigns?

In looking at the problem facing the Presidential campaigns, a new toolset is being created. The first one, staffed by a majority of people on the Obama Technical Team, are going to be the web applications and interfaces you will see everywhere. You will see sites for coordinating, sites for petitioning, the main campaign site, and even the Facebook app site – which is essentially another website – will be collecting all of the click information you do within the site.

You will see the same A/B testing concepts testing on an increasingly smaller and smaller sample size scale to allow for micro-targeting from the campaign at the center hub. But then, they will use the most powerful mechanism of all – your connections – to communicate to you in even better ways.

In a recent article in Slate, Sasha Issenberg discusses the Obama Campaign’s effort on a new system called “Project Dreamcatcher”. From the basic details presented and the interview with Rayid Ghani, my read is that Dreamcatcher is going to leverage text identification solution to determine sentiment and meaning (“listen”) from the conversations going on in the Social ‘sphere. Then with the various people that are supporting the campaign, call them to action to and then to help spread the message.

By allowing the campaign to have access to their social networks, messages are spread faster and with less friction – as long as the campaign can call upon their supporters to create a Social Action to their calls-to-action. Calls-to-action can be as simple as share a video, like a news article, comment on a status update, retweet a link – things that some people used to call “social media”, but I’d rather call “digital artifacts”.

Artifacts are the digitalization of something – whether it is a moment in time (photo), a physical location (checkin), an opinion (post/article), entertainment (video) or whatever. A digital artifact becomes the centerpoint of what is being acted upon – to the benefit of the Actor and the Audience (e.g., their friends/followers).

Put out enough Artifacts and have enough of the “right” kind of Social Actions that are in your persuasion style – and you are likely to get involved. Eli even includes in “The Filter Bubble” a discussion about how even with just the slight repetition of specific words like “moon” and “ocean” in a completely unrelated news broadcast, the participants behaviors changed to have an inclination to “Tide” over other similar detergents.

But there is a big problem that all campaigns need to be aware of: using someone’s data without permission can cause a bigger problem that one might expect. Take a look at the backlash that Klout felt when it was discovered that it created accounts for people it never asked to. The challenge is not that the data is publicly available, the problem is that most people do not understand how the data will actually be used. And, if a political campaign does something of a similar sort, I am confident that the Fourth Estate will have a field day on that blunder. 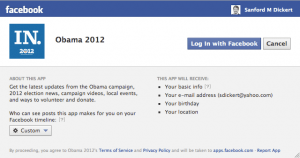 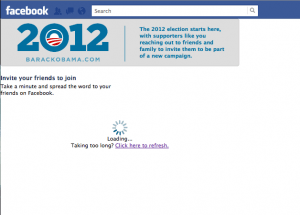 In my humble opinion, I believe the 2012 Election will be about the next step in behavioural targeting using click-stream data and social graph data in a way that allows for influencer marketing to create returns like never before.

Campaigns will use metrics that will drive performance for funding, for sentiment and for votes – but in a more targeted fashion like never before. The Obama Campaign does not only have a technical team working, but a video production team, a slew of copywriters and a host of designers. I can only imagine that they are on the level of a independent studio in creating appropriate Artifacts for this campaign.

Today, Obama’s app is capable of using the social graph data – and when it does, you will see it in the personalization efforts on their targeted messaging.

Note to the campaigns: consider the potential consequences – and play true to the Google motto: “Don’t be evil.”