“Land of the Blind” – intriguing film 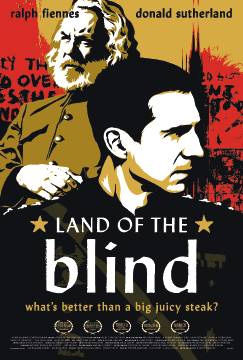 Spent part of Saturday at the TriBreca Film Festival – where my friend purchased tickets to see “Land of the Blind” – a new film by director Robert Edward. While the actors were enough to create a draw (Ralph Fiennes, Donald Sutherland, and Lara Flynn Boyle), what intrigued me was the opening discussion – that the film was a “satiric political drama about terrorism, assassination, and the power of memory”. As written in Ralph Fiennes own website:

Land of the Blind is a satiric political drama about terrorism, assassination, and the power of memory. The film is set in an unnamed place and time, where an idealistic soldier named Joe (Ralph Fiennes) strikes up an illicit friendship with a political prisoner named Thorne (Donald Sutherland). Through their conversations in the high-security military prison where Thorne is held, Joe slowly begins to question his allegiance to the country’s brutal but clownish dictator and his Machiavellian wife. Eventually Thorne succeeds in recruiting Joe to the rebel cause, leading to a bloody coup d’etat with echoes of countless tyrannies, revolutions, and counter-revolutions throughout history. But in the post-revolutionary world, what Thorne asks of Joe leads the two men into bitter conflict, spiraling downward into madness until Joe’s co-conspirators conclude that they must erase him from history.

You are welcome to look at the site link above, but I would suggest getting a chance to see the film on the big screen. I was engaged with the story because there were far too many connections to the past four years, but what was interesting was after the half-way point – where what you expect in Hollywood terms takes a completely different turn.

This movie was a combination of a number of historical references: I saw Lenin and Stalin, Democrats and Republicans, Labour and Tories, Arabs and Israelis. The challenges between idealism and reality. Between what is assumed to be right and wrong. And the last act – leaves you in a state of unreality: was he free or was he still in prison?

This entry was posted in Personal Thoughts and tagged Land of the Blind, Ralph Fiennes, Robert Edward. Bookmark the permalink.

1 Response to “Land of the Blind” – intriguing film