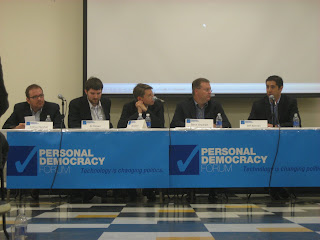 Coming in late for live blogging…

Josh Marshall: input from the readers is key to everything you do. Sort of open source journalism. But use it in a highly mediated way. Talking Points Memo does not support comments – legacy concept (when he used to do HTML from the beginning). Josh got used to email communications and filtered/mediated. Very little user generated content.

Want to ensure quality content – best way editorial is the best way to highlight higher quality content versus wiki work that allows for user-generated. Started TPM back in 2000 – never heard of open-source journalism – he just responded to the positive feedback and it was not until 2004 that he started using the blog as a tool for mobilizing. It was the Sinclair Advertising effort that he made an effort and wanted to get things to happen and work with people to accomplish something. Did something similar with Tom Delay, Social Security and then the ball started to roll.

Moderator: reporter – it is your credibility, your name. As a politician – you are projecting an image. Then, suddenly you have an outsider making videos and comments that becomes associated with something outside of the mainstream.

Why is mySpace doing a two-state poll?

Jeff Berman (mySpace): political activity: Katrina, mid-term elections – after Impact Channel and the Presidential MySpace pages. Friend do have benefits in this community. Straw polls make sense – and the users desire it.

Question to Steve Urquhart – why are the electeds not allowing for transparency showing the bills that happen? The Republicans have crippled themselves with this issue.

Rep Urquhart – candidates are open during campaigns, after being elected are being closed. Understandable bills are needed. We need to clarify the neutral description supporting pro and con argument. people need to understand the arguments. Words really matter – and, instead of an or. Need to flesh-out all of the people. Need informed discussion.

Queston to Eli: maybe we need to do our own hosting.

Eli: network theory – barriers to exit. The more important myspace becomes the next email, it becomes more difficult to generate the social capital elsewhere. Myspace is becoming the next email – especially if there is not democratic structure. Myspace and FaceBook are walled communities where they have control or they are a “true community” which has trials by community to make the decisions, instead of the company only.

Jeff Berman: invites all to come to MySpace and be involved.

Question to panel: who is building the next organization to allow them to form natural organizations?

Question to Eli: the challenge of “gotchas” becoming the defining moment.

Eli: it is not just about user-generated content, we (as citizens) have to become more sophisticated at being more capable of understanding the complex dynamics.

Rep: just the fringes are just talking amoungst themselves.

How do you engage the moderates in the public conversation?

Rep: engage them in the issues that they care about (IMHO – not particularly enlightening)

Betsy from VideoVoter, voter education: centrist voter education is (unfortunately) kind of boring. People think they want to make their own decision, but they often just want to be guided. Too many choices out there require some form of guidance to help guide people in some fashion.

Jeff Berman: mySpace had the My State of the Union – the winner was a centrist – on one hand, on the other hand.

Betsy: It really has to be both sides. You are always going to “piss someone off”.