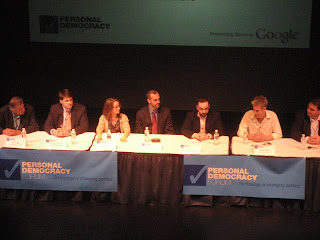 The final panel of the day has Zack Exley and Mike Turk moderating a panel on this cycle’s eCampaign Managers: Joe Trippi from John Edwards 2008; Christian Ferry from John McCain 2008; Mindy Finn from Romney 2008; Peter Daou from Clinton 2008; and Josh Orton from Obama08.

Mike: Discussing how the CIO ended up creating things to move on tech within business. Similar to campaigns – once someone has the insight into managing the implementation of technology across an organization – they have the responsibility of the increased performance through technology.

Zack: DeanTV – back in 2004 was a big deal. how the whole campaign going to ask for money – every big decision was coordinated with the campaign team. Joining the Kerry Campaign, we were in the basement, in a closet – it was not John Kerry talking, it was the “beer” (Ari-Rabin Havt and Zack in their own little hovel in the campaign office – my addition).

Trippi: the issue is about command and control structures. Campaigns have problems decentralizing campaigns. In the Dean Campaign, the Internet team was huddled in a small office. This year, integration of the web team within and throughout the campaign. Some of it is due to the toolset and the opportunities to impact across the landscape.

Four years later, we now have to manage YouTube, Facebook, eventful, MySpace – need to integrate with the rest of the campaign. Have to be involved with the net. Scheduling (though eventful) is being used to pull the campaign into interacting with the web.

Zack: is your job essentially the integration of the new technology within the campaign?

Christian: they are being pulled in. Part of the reason they are involved is because of the goal of the media campaign. Someone who understood how technology integrates well into the campaign (and knows John McCain well). In our campaign, yes – I am in

Mindy: that is my job – that is it integrated. It is incredibly important, that at the very beginning, that from the beginning that they consider what it means to have the web team to be integrated into the campaign effort. Tough to think of things differently.

The challenge is getting the philosophy is that the best way to build a movement is important. There is a challenge, but it is my job that it is integrated.

Mike: integrated might be devalued. I thought that the cmapigns online was because the eCampaign person was buried down low. Discovered that at the senior staff level, even though he sat at the table, he realized that the decisions were often made and the only issue was the implementation of action rather than having the web included as part of the policy.

Zack: being on senior staff at Kerry did not mean we were where and when the major decisions were being made, rather we were about implementing the decisions.

Trippi: best example was the “We, the people” – the culling came from the web team and the senior staff, which got the fund raising, then the scripts, then the team already built up the effort – then ran it in Washington, DC. It was the senior staff being influenced by the web team and outside efforts. You see it with Obama and with Hillary and the way they announced. There is an impact. Problem with the members of the campaign not understanding the issues within the campaign.

Mike/Zack: Hillary video – how did you get her to make that video?

Peter: the trajectory has been absurd. Now that the Internet touches on so many parts of a campaign, that it is impossible to avoid the Internet. Now there are people that consult on how to do this (Josh Ross from Mayfield Strategies). Not always three people making decisions on everything.

In terms of this video, it was very direct and personal – she chose to make light of the National Anthem video. Internet decisions is at the top – there is real buy-in at the top of the campaign. Came on board as “blog advisor” in 2006.

Josh: I was not involved in a presidential in 2004, when I got to the Obama Campaign – by tone, action and attitude, we just slipped into the stream of the campaign. Hope, Action Change – the rest of the campaign see the tools that we have, and how the people are using them. Not just a segmented, isolated par tof the campaign. People are now asking questions about
I do not know what the experience was in 2004, but it must be different.

Trippi: in 2003, everyone was laughing at the Internet. Half of the senior level thought it was crazy. In our own campaign, we had to explain why we had to put up a blog. Now, the candidate calls and asks – when are we doing a video? There is a major change from before.

Zack: Can the enthusiasm be a “curse”?

Peter: People used to come to the Internet group at Kerry and ask for us to fix their computer.

Trippi: Warner’s SecondLife announcement – while it was a great exploration and risk taking, when avatars were changing clothes and suddenly naked, it was a bit of an embarrassment.

Mindy: as many have written in the papers, this is the “Year of the Internet Campaign”. Sometimes it is good (people dropping by with ideas) and sometimes it is bad (too many things overwhelming the tasks), could possibly set us up for failure.

Josh: Another positive, it forces everyone to very quickly, especially if you do not know what another department is doing, you have to learn very fast. Now you have to integrate to make things happen.

Peter: It really is revolutionary what is going on – the transformation of politics. Trying to work your way through the use of all of the tools and how to use them. 20-30-40 years from now, this will be seen as the time when things changed politics.

Christian: what drove this was the ability to raise money on line. When we won the NH primary in 2000 and raised 1M, then everybody bought into the web campaign.

Zack: danah boyd gave a proposal on how to do the digital handshakes – why shouldn’t the candidates make direct contacts with each of the constituents.

Peter: Hillary blogging on firedoglake, on her own (my addition: did not clearly answer the idea behind danah’s suggestion)

Trippi: we had Howard do that – but he was not comfortable as a blogger. We did not have “walls” back then. In the eCampaign manager’s role, the “to-do” list is getting unbearable. This time, you can get inundated with each department asking for things to do on the campaign.

Zack: at the present time, candidates are going to be spending time on call-time and shaking hands. Will we see candidates spending blocks of time on the web?

Peter: we will have a live webcast – beauty of the online media an technology. In the end, it is individuals on a one-to-one or one-to-many.

Peter: there is no difference between internet people and other people. It is the level of connectivity. If a high-dollar donor donates online, are they an Internet donor?

Josh: can people on the campaign understand the abstraction of an Internet team? Unlike it was a couple of years ago, it sticks out much more.

Trippi: we ad a problem with is the “authenticity” of the candidate. We could have someone write on the wall, which is more than likely a staffer. is it really the candidate or someone else.

Zack: we are not “feeling” Obama.

John: there has to be a balancing point – you lose something you gain something – no matter what you do. There will be people organizing to “Take Back the Senate”. Is it a zero sum game?

Open To Questions:
Matt Stoller: do you believe that candidates have less perceived control over the message. If that is true, does that mean there is a shift of power away from the President? Is power flowing away from the Executive Branch?

Trippi: the big shift is to the bottom – power is moving to the people. Numbers are participating even more than before. Glen Reynolds – great book – but you have Goliaths and Davids. Is the Edwards Campaign building the slingshots so they can do something about these issues. Now it is about change.

Aud Mmber: Trippi felt that there was a difficulty. Bush had a moment where he picked up the phone and it was replayed over and over. Hitting one person was valuable.

Zack asks: What would it take for you to believe?

Trippi: one example – Dean’s tuna fish sandwich in front of the computer when Cheney was having a $2000 a plate dinner. People could not believe that it was happening – it was incredibly “authentic”.

Peter: the moment is magnified by traditional media – it just expands on its own. It can be magnified on its own.

Josh: there is a level of cynicism: call three TV crews and have this

Ari Melber: Will we have a “justin.tv” like candidate?

Mindy: absolutely. Unedited information will happen. (my opinion – not in this cycle)

Josh: there is content with Obama talking to others, much more personalized, the mechanism is there – much easier.

Ari Melber: How do you plan on taking input on things other than theme song. For example: minimum wage, etc and take it into the campaign so the feedback can be placed within the campaign and the governance. Or do you not see that role that way.

Peter: most successful initiative was the petition for the resignation of the Attorney General. While humor is important, the information is as well.

This entry was posted in Campaign Management, Personal Democracy Forum and tagged PDF2007. Bookmark the permalink.