Obama a Muslim? Obama in a madrassa? Waitaminute!

“Oi!”, as my Jewish grandmother would say. “This guy, Obama was a Muslim? How could I vote for him?”

Oi indeed – if my grandmother believed all that the Internet provides. Recently, I got an email from another friend of mine showing me this assertion – suggesting that because Obama’s father was Muslim and was Islamic, that meant that Obama naturally was – and that the Senator was potentially lying! When you read the stories that are being propagated on the web:

PLEEZE – get a life!
Frustratingly, these assertions are ones that are not particularly relevant to the issues that we need a strong leader for (IMHO), especially since they seem to be assertions, not statements of fact. I personal worry that the discussion of these assertions give them life (since others see them and will not take time to read the details), But, for the sake of free discourse to occur, lets discuss the assertions:

Assertion: Obama was (at one time in his life) a Muslim
Okay – this one I have been searching for details to fight – especially the concept that if the father is Islamic, then the sons are automatically Islamic. In the Jewish faith, the children of a Jewish woman are considered Jewish, but the father has no official determination in the Orthodoxy in this matter. But, what is amazing to me is that the decision of a parent is assumed to automatically become the mark on a child.

In my upbringing, I was raised Jewish and attended nursery school at a Jewish temple until I moved to another school for my education. But, while I was growing up, my mother introduced me to various other religions – I even remember attending a Midnight Mass when I was very little. I remember some of the lyrics of the hymns when I was there (I have a decent memory for lyrics), and could more than likely recite them quite well today. I also remember the Sh’Ma that I heard in temple and could easily sing those lyrics as far back as when I was not in Hebrew School because I thought the music of hundreds of people singing the songs were beautiful as well.

But just because my mother was Jewish, it did not mean that I was “automatically” Jewish. Even though I had never been Bar Mitzvah’ed, I took it upon myself to go to services, to pray during Yom Kippur, to stand up at the be’ma and become part of the Jewish Community wherever I was, since I grew to accept the Jewish faith as my own. Tuthfully, it was a personal decision – and one I chose for myself – not because my mother might have been Jewish.

Senator Obama seems to have chosen a different path from his family – while he may have been exposes to Islam at an early age (even the video on the FightTheSmears website discusses that there is a religious class taught there), Senator Obama made his choice on religion and has been a committed Christian with his wife and children. Does this mean he is any less a Christian from being from a Muslim father? Is not Christianity about the acceptance of others and the strong belief in the acceptance of Jesus as the savior the metric in which we are part of that faith? 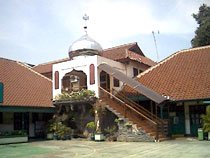 FACT: Obama is a committed Christian and it is HIS choice to be one.

Assertion: Obama studied attended a “radical madrassa.”
While some people use this one website to assert that Obama’s primary school taught religious studies to all of the students, I have to refer back to this video from CNN who shows us that a primary school – even 40 years ago – was a government run school teaching secular teachings. Consider the photo of the teachers at that time – would an Islamic school or a “radical madrassa” have men and women garbed the way the teachers were? Watch and video for yourself.

And, my favorite response from my Repub friend: “But do you know what “madrassa’ actually means in Arabic? It means ‘school’. So, if Obama went to a primary school in Indonesia, then it means he was in a ‘madrassa’. Right?”

“Oi!” again. Yes, the literal meaning for “madrassa” does stand for “any type of school, secular or religious (of any religion)”, but our common use of the word, it refers to a religious Islamic school, not unlike a temple or Sunday school. So, while the evidence from the CNN video shows that the school itself was not a school of Islamic studies, I could suggest that it was a “radical madrassa” since it was operating like a typical Western school, without the primary focus of Islam and religious studies. But, in the terms being asserted, please – get a life.

FACT: Obama went to a government-run, public school that was not focused on teaching Islam to its students as a primary means of education.

And I find it hypocritical that some of the people who are making such assertions (or replicating them) are the same people who would strive for creating programs in “Intelligent Design” in our secular school systems or support the removal of the separation of Church and State from our government and educational institutions.

A man’s (or a woman’s) faith is their matter for themselves and their G-d. Our choice is whether we wish this person to become our President. For this choice, I can not see that Senator Obama does not have a relationship with G-d – I see a man, with his family, supporting both his faith and his choice of faith. And while the Reverend Wright may have used the bully pulpit to his PR advantage, the Senator did not waver from his faith or his belief.

Religion and the ideals of a religion ARE separable from the man (or woman) leading them. Much like the ideals that this country was founded upon, the men who have lead may have strayed from them at times (and boy, do not get me started on the Bush Administration). This country is a beacon in this world – an incredible ideal that EVERY DAY we have to continue to struggle and fight to reach those perfect ideals. I think discourse is fine – and I think a good discussion is always valuable. But sometimes, I think we can get lost in the salacious minutia and forget the big picture.

Please. Do not forget why we are in this election this year. And why your choice should be on who will accomplish what we need for our future and our children’s future.

UPDATE: another great site: Is Barack Obama Is a Muslim?

This entry was posted in Campaign 2008, Political Thoughts and tagged Barack Obama, Obama Christian, Obama in a madrassa, Obama muslim. Bookmark the permalink.