Can we get over the MSM’s preoccupation with attacking Craigslist?

Again, I am amazed at the mainstream media’s preoccupation of the “Craigslist Killer” – as if the website itself was the birth of this psychopath’s actions. I loved Craig’s response to the ABC Nightline report: 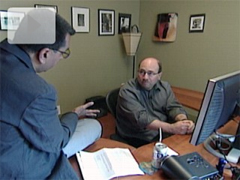 “My first reaction is sympathy, I mean I feel pretty bad for the victims and their families. I don’t like it at all. Beyond that, well, how would you feel if … the bad guy watched what you do on TV and started calling [you] the ‘ABC Killer?’ That’s pretty much how I’m reacting,” Newmark said. “It just feels bad. You know, remember, I’m spending a great deal of time here fighting bad guys.”

Creating the name for this killer using the media source that the victim may have come from is almost as silly as it is stupid.

I can only wonder what will happen if someone swindles the members of a high-end dating site – and we will then hear about the “JDate Swindler” or the “A Small World Con Man” or whatever. Or what if someone uses a GM car to go to the commissioning of a crime? Will we be calling the bank robber “The Buick BadGuys”?

Can the MSM get over the anger it has for Craigslist and focus on building its own business model? I know that Criagslist is encroaching on the tried and true model (Newspapers Brace for Ad Battle as Craigslist Grows, NPR) Focusing on what is essentially a very simple, community-managed web site that has grown from a simple email list to a trusted, community managed source of content is nothing to be attacking. The newspapers ALWAYS had a chance to be here – and could still be here as other magazines and newspapers are doing (like The Village Voice BackPage and the New York Times).

Stop being fearful and be aggressive. Focus on building – not on bemoaning about the “death of newspapers”. We will always need newspapers – an editorial voice with the money to have the best reporters and researchers protecting our rights – and we, the people, will pay for that to happen. Especially when we need an aggregator of all of the events in out world to resolve what is “important” and what is “noise”.

Be the leaders, not the whiners. Please.

1 Response to Can we get over the MSM’s preoccupation with attacking Craigslist?