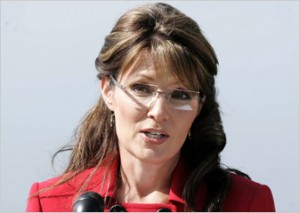 Alaska Gov. Sarah Palin (R) announced this afternoon she will resign from office on July 26 and return to private life, a stunning decision by last year’s Republican vice presidential candidate to leave office before the end of her first term.

“We know we can effect positive change outside government at this moment in time on another scale and actually make a difference for our priorities,” Palin said in a news conference alongside a lake in her hometown of Wasilla, Alaska.

Using a basketball analogy, Palin said, “I know when it’s time to pass the ball for victory.”

Palin, 45, is a major star in the GOP and is seen as a leading candidate for the party’s presidential nomination in 2012. Her decision not to run for reelection in 2010 and to leave office imminently came as a shock to Republican strategists today.

“We’ve seen a lot of nutty behavior from governors and Republican leaders in the last three months, but this one is at the top of that,” said John Weaver, a longtime friend and confidant of Sen. John McCain (R-Ariz.), the party’s presidential nominee in 2008 whose of selection of Palin catapulted the first-term Alaska governor to national prominence.

Alaska Lt. Gov. Sean Parnell (R), who will succeed Palin, appeared with Palin and complimented her service to the state.

Do we really think there is nothing to this?

UPDATE (11pm EST): Just reading the Daily Beast and see that there might be a scandal brewing in the world of Palin. Supposedly, there is an alleged scandal centered around a building contractor, Spenard Building Supplies, with close ties to Palin and her husband, Todd. We shall see.

1 Response to Palin to Resign?