I was watching the Sunday morning political chatfests and it reminded me why I worry about the future of our republic.

When I got heavily involved in the political process, I was so upset at how the Bush Administration had destroyed American credibility abroad with the folly of the attack of Iraq, the snub of our responsibilities on the world stage with regard to our place as a world citizen and the general “holier than thou” attitude when dealing with issues that could seriously impact the entire world, not just within our borders (e.g. climate change). 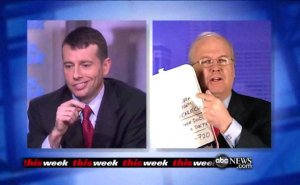 Today, I watched Karl Rove on This Week do what he does best, which was obfuscate the issues at hand by claiming the Obama White House had done some things that I know the Bush White House had done over and over. I saw him use the Glen Beck process of using a whiteboard to prove his point when no one could actually read it. I could devote an entire post on his absolute arrogant process of FoxNews-ifying the show (see for yourself) with his hypocritical cries of how the Healthcare process was not bipartisan, while never once bringing up the point that his own party has been the inertia and friction that has brought government to a standstill in the frequent use of the filibuster and procedural tactics that causes America to think Washington is broken.

What are you talking about, Sanford?

Let me try to explain my frustration with a story that rankles my engineering sensibilities:

But if the opponents of X have a weak hand, or have a weak position, it is better to obfuscate and delay the process than to actually discuss the problem when they know they can not win the argument.

Sorry – but it just doesn’t cut it with me. Sadly, I know far too many people think the Repug narrative of “big government, bad government” and “no one wants this bill” registers far too well.

Reconciliation is a procedural method for passage when you have a majority, and when the minority is delaying (even when Dems are in the minority) – there must be some way to either get the minority to agree – or to get out of the way.

With the polarizing media efforts, the killing off of moderates – are we surprised that the coalitions of yesteryear are almost impossible to create?

1 Response to Thoughts on Bipartisan Healthcare, Filibusters and Reconciliation