Afterthoughts on the Rally to Restore Sanity and/orFear 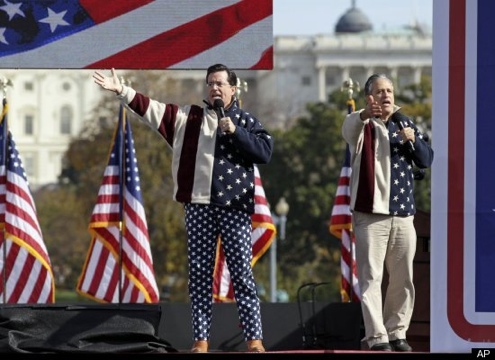 Cross-posted on The Social
Engineer:

So, on the return bus with my compatriots from the DL21C and I must say, I was quite fortunate to get this bus and this ride – on our return trip, we ended up picking up four stranded HuffPo travelers who could not make it back to their buses. Stories of lack of organization, leaving late, arriving late were rampant. The refugees were still happy since the event itself was one that they felt part of even though it was not all they expected.

So, what was your thought Sanford?

I got there an hour and a half earlier and the Rally was entertained with replays of snippets of both Stewart and Colbert talking about their respective rallies. It was entertaining, but continually cramped. You could see that the place was laid out by someone, but no real staffing on managing the space itself.

When the event started with a countdown, it was an unusual start – The Roots and John Legend performed for over 40 minutes – which was definitely not what was expected. Then we got further entertained by the boys from Mythbusters with a couple of crowd experiments which included the world’s largest wave and meat orchestra. By five to one, I was getting worried – and then John Stewart showed up.

The Chilean mine bit was kind of funny – but the storyline seemed kind of out of place. As the remainder of the event trammeled through the next two hours, I realized a couple of things:

Stewart and Colbert and friends were following the thread of satire in response to the Glenn Beck performance on the Mall months ago. I think John was essentially trying to ask for a rally that was simply fun – and avoidance of the media mess that causes the partisanship or amplifies it for the same of the media machine.

Stewart said on one of his shows, “Take it Down a Bit” – which I think was his intent. The jokes were there, but the choice of music, the lack of political partisanship and soaring rhetoric was intent. It was as if John Stewart had a large backyard and brought a couple of his friends to lay and act – as you might have seen at the Stewarts back in the 70s as John was growing up.

He got some of his friends to perform, he got his buddies to perform comedy and he got to stand up at the head of the table and give a little sermon. This is what the rally was – never that it was a political rally.

Only thing I wish he had done: wish he had told everyone to go out and vote on November 2nd. With that size of an audience, it would have been the perfect coda.