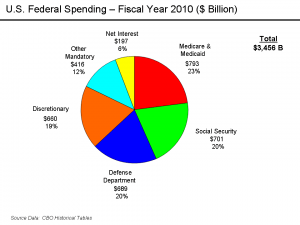 When do we start really cutting?

Sorry all – but here is something that got my goat. More and more I am reading about the problems of the deficit and the fact that the Federal Government is looking for ways of cutting the deficit. But can someone please explain to me why attacking what amounts to $32M in Corporation for Public Broadcasting (CPB) funding is such a priority? I mean, come on – we have a $1.3 Trillion deficit this year and a Federal deficit of over $16 Trillion. We are talking about one-half of one-ten-thousandth of the current year deficit. CBS News has a great breakdown of what is happening – including the resignation of NPR’s CEO to save the funding.

You ask: how did I come up with that number? Well – based on what is on Wikipedia, the 2009 budget was $164M in total. And in an article in the Christian Science Monitor, the CPB contribution to NPR makes up approximately 2% of the NPR budget.

So, keeping with the mission of the CPB and the overall effort to keep a free-and-fair programming, the “deficit hawks” are going after essentially $32M in that grant. The good that NPR and the CPB does for our country – especially across the rural parts of our country – is incredibly valuable. When are the Congressional “deficit hawks” going to go after the real portion of the pie that is gauging us?

Take a look at the graph to the right. We are going after less than 1% of the Discretionary budget. Something seems wrong with this picture, right?