It has been a long time since I have posted – for the past four years, I have been building another company addressing the needs of parents and their home security.

During the last Presidential Election, I made sure my vote was counted (even when my absentee ballot was accidentally not accepted by the County Office of Elections). This year, I thought I should spend a little more time on the research of Florida candidates.

One thing I hate the most is that trying to figure out whom to chose is insanely difficult.  There are over thirty people to evaluate on the Democratic primary ballot, and no easy way to understand these down-ticket candidates.

UPDATE August 9th: I found a great site for you to make your own choices: check out On Your Ballot at https://onyourballot.vote411.org/

Just type in your address (I just did the City, State and Zip) and all of the candidates showed up!

Sure, I can watch every Democratic candidate get their one hour interview from the Miami Herald, Sun Sentinel and Palm Beach Post – but this is not an easy way to absorb the details of these candidates.

As a stats guy, I can use the simple details of number of views to give a straw poll of candidates and see how they are doing as of today, Sunday August 5th:

Could this be an inverse metric since people are looking at candidates that re not getting media saturated?

Since I live in Pinellas County now, time for me to look at candidates and whom I am voting for.  I will go through the ballot and share the candidates that are up and the Editorial Board selections given in support of their candidates in Florida.  In particular, I use the Orlando Sentinel, the Tampa Bay Times and the Miami Herald for my state-wide notes.

And since I am a registered Democrat, I only get to list the Democratic candidates for your assessment.  And since I am still looking for information, I will add as I receive it. 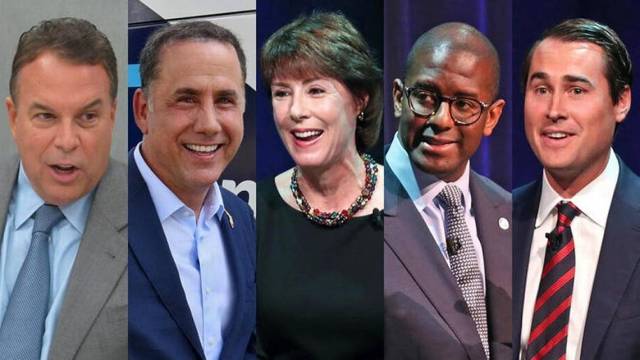 Gwen Graham is a Tallahassee lawyer, former member of Congress and the daughter of former governor and U.S. Sen. Bob Graham. Her life experience as a member of a prominent political family, an active mother of three and a labor lawyer for the local school district would bring a refreshing perspective to the Governor’s Mansion.

Nothing yet from Orlando Sentinel or Miami Herald aside from interviews with the Miami Herald Editorial Board.

For me, there is a desire for change like Gwen Graham and an old hand at running a city like former Miami Beach Mayor Philip Levine.

Democrats have two candidates for attorney general from Tampa with clear ideas about transforming the office into a more independent voice that would more aggressively protect consumers and the constitutional rights of all Floridians. Rep. Sean Shaw has the broader experience and better grasp of state politics to pursue that vision.

In addition, you can learn more about these candidates on this post from the Orlando Sentinel here: Florida attorney general race pits establishment candidates against newcomers

Three candidates are up for this role – Nicole “Nikki” Fried, Jeff Porter and David Walker.

Three South Florida Democrats are vying for commissioner of agriculture and consumer services, an office dominated for decades by Republicans with farming backgrounds. Nikki Fried, an attorney and lobbyist who has worked for the burgeoning medical marijuana industry, would bring a fresh approach and a better balance between the competing responsibilities of the office.

Again, Orlando Sentinel and Miami Herald has not made any recommendations yet.  But, there are issues around:

Two candidates are running for this office – Dawn Douglas and Tom Ryan.

Two Democrats are running in this competitive district that includes most of Clearwater and Largo. Dawn Douglas, a reading teacher at Oak Grove Middle School, is the best prepared.

Since this is a local issue, the Tampa Bay Times gave their opinions – and truthfully, most of these seem to make a lot of sense.

I chose one on other factors, but the ones that standout are shown below: