Sen. McCain on John Stewart….what the?!? 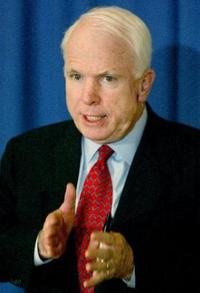 Got home and turned on the TiVo to watch the Daily Show tonight and watched Sen. McCain chatting with John Stewart. All I can say is, “OMG!” What the? It was a strange and surreal mano-y-(somewhat) mano between Stewart and Senator McCain. I have not known many Naval officers in my life, but the verbal engagement style was strangely familiar. Haven’t I seen this performance before? Almost down to the hand motions and the vocal intonations.

Not sure Sen. McCain should have been on the show – Stewart was operating at a high, and the Senator seemed to defensive and aggressive – all at the same time. It was an interesting dance I saw – a person who wants to be seen as against the efforts that brought us to this point in Iraq (criticising the “architect of the war”), but believes (IMHO) that staying the course is the best, most correct course of action. From his point-of-view (and many other Repubs), it seems as though staying the course without a plan (aside from letting the General do his job) is the correct course of action.

Open to the discussion, but not pleased with how we got here

While I have never been a proponent of the war (I used to argue with my Sephardic family members against the run up to the invasion), I can understand the logic presented. If General Abizaid is going to accomplish the effort of nation building (which former Governor George W. Bush claimed we would never do in the Presidential debates of 2000), then having the Sword of Damocles (read: pending timetables) will not help accomplish the task of bringing peace to the region. McCain’s claim is that we have brought this on ourselves (the poorly architected plan for the invasion), but it is our obligation to clean up the mess we have brought (“In for a penny, in for a pound”) to the region and the world.

This is what I fear – we have spent $420B in the running of this war as of the time of this writing (thank you National Priorities Project), the money that could have easily been spent on so many other things – including money spent to effect change in the region through economic support and largess. I do not want to think about how much this could have impacted our lives here in the US, let alone to the planet. The challenge is when you look at this expenditure, there is a feeling of “was it for naught?” Do we treat it as a sunk cost and get out, or do we stick it out – get behind the idea of staying for the long haul and push forward for a resolution where we mediate and maintain the civility while the opposing parties work it out?

The consequences of leaving will be expensive, cumbersome and potentially damaging – after our many mistakes in the region. Staying in the mire that is this “war” feels like being a battered wife in a bad marriage. But leaving, just when the efforts might be providing some return, almost feels like we are getting out just on the brink of bringing the issue to a successful closure. And with the press stoking the flames on whomever is watching (and how the political wind is blowing at whatever time), the facts are not clear – and we seek competent leadership. Can someone show us that they are a true leader and accomplish the task with the confidence and authenticity that we as Americans crave?

Sen. McCain – you did not make the case in a compelling fashion – and left me somewhat concerned. While I got the gist of your statements, I was less that impressed by the delivery. Truth is better served without aggression and bluster.

Update April 26th: thanks to Michael Weiss on Slate.com for the link to the site (and thanks for the correction!). And appreciate that he captured the conflict that resided in the show and my thoughts on the issue.

This entry was posted in Campaign 2008 and tagged Campaign 2008, John McCain, War in Iraq. Bookmark the permalink.