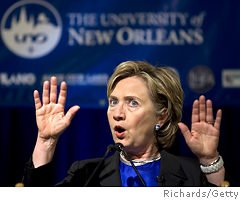 You know, reading the news cycle, I was amused at what is the game of this season – portraying numbers as measures of success for future electability. Reading the news, I see that Obama generated $19M with 93K new donors and Hillary generated $22M with 100K new donors. But, as any economics professor knows, it isn’t the revenues that make a company – its profitability that’s important.

Campaign Marketing Spend
In the 90s, with the dotcom era running rampant, companies would spend extravagantly to generate buzz int he ever increasingly injured public. Nary a day went by without a new press release trying to tout why this company was going to be the market definer in X, the global solution in Y – all fueled by the largess of the venture capitalists that were looking to increase the interest of the IPO public – who, at that time, was the individual investor.

Flash forward to 2007. This year, the Internet is playing big – where the news is served via feeds, the video is captured on mobile phones and a rumor can fly with the speed of a google web crawl (or references from your friends). With so much happening in the world (credit crunch, Iraq war, global warming) and the election still only three months away, how does one make their mark – if they can not spend on advertising? Via earned media.

In the tech world, we spend money so people can learn about our product through magazines, conferences, and (perchance) a mention on an influential page – where a blog, a newspaper or even a news-magazine. This is the concept of earned media – and what PR professionals get paid to do ALL THE TIME. When you have a piece of news that is good – you trumpet that – disregarding those niggly things called “details”. But with an economist in the house, who is interested in profitability, we concern ourselves with those “details”.

In finance parlance, it is called Cost of Goods Sold or COGS – which is usually what it takes to make and market the product. In widget companies – you think of this cost as what determines the margin – profit which is money paid for the product by the consumer minus the costs into selling it to the consumer. In movies, this cost can often be much higher than the box office receipts (think Godzilla) since the marketing effort is not simply for the product (in-theater, domestic movie launch) alone. They consider the expense a long-term investment – keeping the brand in the mind of the consumer when it hits DVD rental and sales and pay-per-view and so on.

So, what does this have to do with these numbers? Well, in politics, rarely do people spend time evaluating COGS since the only number that matters are the ones you can trumpet. While the candidates trumpeted the receipts and numbers, did you notice that the cash on hand number was not discussed? Or even how much they spent on fundraising.

What if I told you that for every dollar collected, a candidate spent two or three to collect it? What if the value of slowing momentum in a race was more important that the actual amounts collected – and you had the money to spend, would it be worth trumpeting?

A friend of mine told me the story about Senator John Heinz who, when first running, had a bunch of money behind him (his own) but needed to build a “base” to show others that he had support from “the people”. So, as in all political campaigns, then Mr. Heinz spent a large amount of his own money to ask for donations – through fundraisers and particularly direct mail. While I do not have the numbers from that effort, you could see how someone could potentially generate X dollars in donations from Y supporters while spending 3X to 5X on acquiring those dollars and donors.

So, come October 15th – when the numbers come out from the campaigns, I am going to take a look at the CODC for the campaigns. And then I will see who really is generating “grassroots” support. Will anyone care then? Not sure. We may have moved onto some other major policy discussion.

In politics, the challenge for a candidate is making an efficient political “machine” – and the hype says Hillary has built it. Maybe yes, maybe no. If you are interested, check back on October 17th.