Watching Senator Kennedy at the DNC08 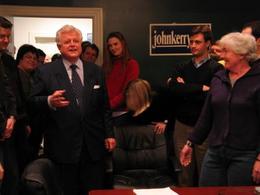 I am sitting at home, preparing for the trip to Denver tomorrow, and watching the video of Senator Kennedy and watching JK and others speaking about Senator Kennedy. I remember when Sen. Kennedy came into our small brownstone in DC and cheered us on, right after we had the changeover of campaign managers. We were suddenly brought into the main conference room, and were to see someone. And in walked Senator Kennedy with his dog.

It was funny to watch this lion of the Senate come into the office and get us fired up back when we were one point below Rev. Al Sharpton in the polls, and he was there – cheering all of us on.

Watching him tonight, it reminded me of that speech, but it was obvious that Senator Kennedy was in a different state – but he is here to fire up the convention – and I think he did.

“BO will close the book on race, agenda, group against group, straight against gay. BO will be a commander in chief will ensure that our fighting men and women will be committed to a mission worthy of their bravery.”

“Our people rose to the challenge of making it to the moon. We reach the moon, we scale the heights, I have seen it – we can do it again. Not simply victory for our party, but renewal for our country. The work begins anew, the hope rises again and the dream lives on.”

This entry was posted in Campaign 2008 and tagged democratic convention, DNC08, Senator Kennedy. Bookmark the permalink.