Summary of the Florida/Broward 2008 Ballot 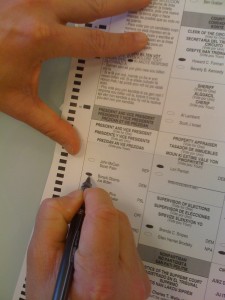 Voting on the Broward Ballot (photo by @fredericguarino)

Whew! I just got my ballot in the mail (since I hate long lines) and I was astounded at the NINE EIGHT sides (four pages) of content on the ballot.

Last cycle, I was on the Early Vote effort for Kerry, I remember going to houses and condos of Early Voters and seeing their ballots on their kitchen tables and the need for the voter to go through all sorts of information to understand each of the ballot measures that were there.

So this time, I decided – why not make a cheat sheet on how to find the answers to the different ballot measures that you might need to research. Spending time on google is one thing, spending it on six different elected offices, six statewide amendments and ten county initiatives is quite another…

I am going to list all of the elected positions on this post, and then summarize the amendments and county initiatives on another. And to help in making a choice, I am going to include the opinions of the two major papers of the area – the Miami Herald and the Sun-Sentinel.

Indeed, the way the two candidates responded to the economic meltdown offers a lesson in contrasting styles of leadership. Both have put forth a series of worthwhile policy options, but where Sen. Obama was calm, Sen. McCain was frantic. He first put his campaign ”on hold” and suggested he would cancel the first debate, and then suddenly decided to take part even as the first bailout deal cratered. He said the fundamentals of the economy were strong, then a few days later vowed to ”name the names” of those responsible for the financial crisis.

In other elections, voters have complained of having to make a choice between two bad candidates. That is not the case this time. The nation is fortunate to have good candidates and a clear choice. Sen. Obama represents the best chance for America to make a clean break with the culture wars and failed policies of the past, and begin to restore the hope and promise of America as the world’s greatest democracy.

Wexler, though, has remained an effective advocate for his constituents, even when he went his own way. His early support for a longshot presidential candidate named Barack Obama will result in a big political return for himself and his district if Obama wins the White House.

Gov. Charlie Crist did Broward residents a favor a year ago when he appointed Al Lamberti as sheriff. Mr. Lamberti’s calm demeanor, 31 years of service and extensive background in law enforcement and police administration stand in sharp contrast to his predecessor, Ken Jenne, who was just released from prison. Jenne was a brilliant policy wonk and a career politician who built the agency into a public-safety empire, accreting vast power that he frittered away with corruption and greed.

Mr. Lamberti, 54, a Republican, began his career as a corrections officer and worked his way up. He served as chief of Deerfield Beach and interim chief of North Lauderdale, which rely on the Broward Sheriff’s Office for police service. He was interim chief for Hollywood during a turbulent period. He also supervised BSO’s organized-crime unit and chaired a regional team on narcotics and violent crime.

Further, he led the effort to integrate child-protective services into BSO from a troubled state agency. Mr. Lamberti recognizes that BSO is not just a police agency, but also is the community’s social safety net. BSO handles child protection, county probation and domestic violence matters. Its jail houses homeless people who can’t be released on bail for lack of an address. It also serves as a huge mental-health facility.

Mr. Lamberti faces Democrat Scott Israel, 52, on the Nov. 4 ballot. Mr. Israel also has solid police credentials, but would have a steep learning curve in directing a multifaceted agency with a $700 million budget and 6,300 employees. He recently resigned as North Bay Village police chief after years with the Fort Lauderdale department, including work as a community-support captain and SWAT commander.

When Al Lamberti took over as Broward County sheriff a year ago, the situation could hardly have been worse.

He was appointed by Gov. Charlie Crist last October, after Ken Jenne was removed from the office in disgrace. Morale was low, the department was still dealing with the murder of Sgt. Chris Reyka, and a steady hand was needed. And shortly after Lamberti became interim sheriff, Deputy Paul Rein was murdered.

Lamberti, a 54-year-old Republican, has done his best to get the department of 6,300 employees back on an even keel. For that, the Sun Sentinel Editorial Board believes voters should retain him in office in the Nov. 4 election against Democrat Scott Israel.

Thirty-five years ago, electing the Broward clerk of the courts made some sense. The clerk then served as comptroller with auditing powers for the county. But this power was abolished in the county’s adoption of a charter.

Now the post largely is a bureaucracy that handles documents and other functions for the judicial system and involves little policy making. Yet the clerk’s job has been protected as a political plum by the county’s charter-review committee, which has declined to recommend that voters consider change.

The incumbent, Democrat Howard Forman, 62, has a political career stretching from service on the Hallandale City Commission in 1973, through the County Commission and the Florida Senate. He was one of the county’s more thoughtful and politically able individuals. He was elected to this post when he defeated Ed Kennedy, another politician appointed to the job after the 2000 death of veteran Clerk Robert Lockwood.

Now Mr. Kennedy’s wife, Beverly Kennedy, 65, a financial planner who is running without party affiliation, wants the job. She has been a frequent candidate for a variety of offices and has served on several government boards. She has much to say, but few qualifications.

Ms. Kennedy’s criticisms of the office, however, are valid. Mr. Forman has yet to take full advantage of technology after eight years in office, and his website is not as user-friendly as those of other court clerks.

Mr. Forman says that he is working on the problems and that improvements will come soon. To his credit, he has made the office proactive on social issues such as domestic violence, child support and mortgage foreclosure.

For Broward clerk of the courts, The Miami Herald recommends HOWARD FORMAN.

Howard Forman is an experienced public official who has done a good job upgrading the technology in the Broward Clerk of the Courts office. The Editorial Board of the Sun Sentinel strongly recommends voters re-elect the Democrat to a third term as he continues efforts to make the office more consumer-friendly.

4 Responses to Summary of the Florida/Broward 2008 Ballot