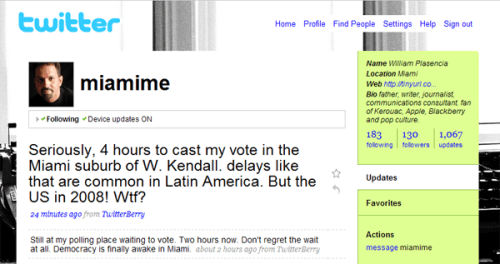 Already – in Florida, reports of issues are already happening. Granted, this is a complaint on a delay in West Kendall in Dade County – but come on, this is 2008.

An ambitious team of developers and technical people are trying now to get a project launched in time for the election to allow members of the voting public to communicate on what the status is of the polling places around the country such that issues are not swept under the floor and people can act/react to the issues – and contribute to the success of the our political process.

The concept is simple – when you see an issue, see he status of what is happening at your polling station, send a message to #votereport via twitter or a number of other mechanisms.  The tweet, message, call, whatever will be collected into a single database and can be used for visualization (on a google map for example) or with a SMS message to the Voting Right Attorneys in Florida.

The goal, stated by the team (which includes Allison Fine and Matthew Cooperrider) as well as a slew of volunteers who have joined the cause, is to create a non-partisan service which allows for the freedom to vote to be protected by all Americans, not just the ones hired by the states.

Are you interested in doing some programming?  Some marketing?

The team needs your help.  They are looking for people to get involved in the coding, the spreading the word about the process and the engagement of others into the fold to make this happen – through partnerships with any number of anti-suppression groups.

If you’d like to jon – go to http://groups.google.com/group/twittervotereport and ask to become a member.  You can do your part.