This evening, after spending the day babysitting the twittervotereport machines with Dave Troy of twittervision fame and the guys at NetworkRedux (Thomas Brenneke, Damien Korzenoski, and others), I had a suite of parties to go to this year, since everyone was incredibly jazzed to see the election results.

I took a walk to the DL21C party (located in a beautiful theater with three levels) but it was incredibly crowded and not quite personal. So, after a while, I followed a friend from BALCONY to the New York State Dems Party at the Sheridan near Times Square. In that party were a lot of the same people I have seen in other NY State parties and watched as Obama was declared the winner by CNN to be the President-Elect.

My friend Mitchell and I decided to get out of there – and decided to head toward Times Square – all the while discussing the incredulousness of that had just happened. It was something like a dream. As we walked, Mitchell joked that there would be no one at Times Square at this late hour. And then we came upon the CNN Election Watch Party at the crossroads of 50th and Broadway.

All four sides of the street were lined up with people just waiting for the chance to cheer on their new President, and we patiently waited while Senator McCain gave his concession speech. And then we waited until we were told Senator Obama was coming to the stage. And as he strode forward, the cheers erupted aloud and all of Times Square was nothing but an extension of the crowd in Chicago.

Suddenly, the TV goes out!

Yep – as we are about to listen to Senator Obama speak, the big screens surrounding us suddenly go to rainbow test colors – and we can not see anything except the screen int he far distance being run by the ABC crew. The people there are insane with cries of “WTF?!?” 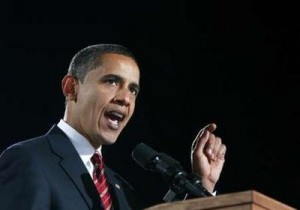 We are shocked – we are here to be part of this event – and then, after ten minutes – the screen returns – and we hear the majority of President-elect Obama’s speech.

At the end of his speech – after all of the people were cheering, I decided to head out before the festivities were done (watching Senator Biden come out and the wives and so on). But what I saw amazed me even more.

The people in the crowd (had to number over 10K) were all with a dreamy look in their eyes – as if they were part of history now. As I watched them – I saw their own internalization of what happened tonight, and how their lives may be changed for the better. Black, white, American, European, Kenyan, Latino, Pakistani, Indian – I saw all of these faces – and in every one of them, there was this sense of peace and, dare I say it, hope.

President-elect Obama – you have the weight of a Nation on your shoulders. Bear it well and with the courage you spoke of. This is your time to show America – and the world – what it truly means to be a leader.

Thank you for that moment sir. I think I know now what my family spoke of when Jack Kennedy became President. It has been an honor being part of this moment of history.