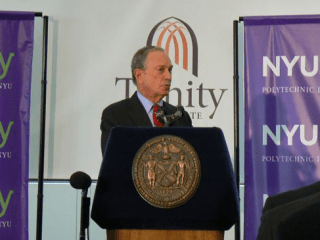 This morning, I got down to New Work City (a coworking space I am a co-founder of) and met with the Mayor of New Work City, Tony Bacigalupo and headed to 160 Varick Street – home of a new incubator that was being spearheaded by NYU-Poly, the NYC Economic Development Corporation and other interested parties (including the real estate developer Trinity, which is one of the oldest real estate developers in the City).

I joined Tony at the space because we were part of the effort that helped bring together a bunch of other space providers (think Regus but different) that had come together to offer the City an alternative to building incubators, without first considering what some entrepreneurial space developers had already formed for small businesses in NYC. The coalition (known as Coalition of Space Providers) came together and is currently made up of providers from:

Check out the press releases and articles on the efforts:

You will see more about the COSP and their efforts at http://www.bootupnyc.com.