Could Obama be thinking of one-term and done? 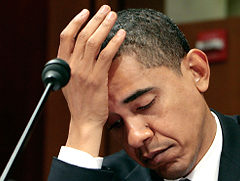 A couple of days ago, a political consultant was talking to me over drinks at a Xmas event and I heard him muse that maybe President Obama might be thinking a “one-term and done” strategy.

Instead of trying to focus on the next election and triangulate (as Clinton would have done) making the next two years more about political pandering versus repairing our country, President Obama may actually think it would be a better the idea to announce – in the coming weeks – that he is not going to run for re-election.

Incredible thought? But, consider the benefits:

Given the recent support by former President Clinton on President Obama’s tax deal plan and the sharp analogies people are pointing out between the Obama Administration and the Bush 41 Administration, I am beginning to wonder if something like this is becoming true?

Or could it be that Hillary might be Obama’s running mate in 2012?  Not too sure.

I am still a big Obama fan for the simple reason that McCain and no one on the Republican side of the isle seems to have a wherewithal to truly run the country and make some hard decisions (with maybe the exception of Chris Christie, but he likes making decisions – not solving problems).  Obama has had to face some incredible challenges – and I am nothing but pleased that he is my President – especially when you look at what might have come.

Related article: Will Barack Obama Be a One-Term President?

UPDATE: No, I did not read this article from November 14th at the Washington Post, but I was surprised that my thoughts dovetailed with them.  And you can see some rebuttals to them in the Letters to the Editor.