As I went for my snack of cashews this evening, I took a glance at the newest Rolling Stone and saw the cover that graces this post. Underneath the “A New Hope” title, I saw the subtitle that I had been waiting for, “The Machinery of Hope“, covering the process story that I wondered if it would ever see the light of day. 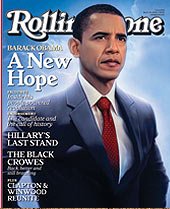 I got a little guff from some other posters out there about my article on whether or not would social networks impact the 2008 election, and I think that the premise of my argument might have got lost in the translation. Simply, the idea that social networks like Facebook, MySpace, Bebo, hi5, MyYearbook and the other 100+ social networks that currently line the Internet landscape would not seriously impact the election if the campaigns did not apply resources to the problem of virtual canvassing.

What pleased me in reading this article from Rolling Stone was the fact that the campaign married online engagement with offline activities and vice versa. Never a campaign event went off without capturing people’s email addresses, zip codes and names as they came to the event. Never a chance was forgotten to drive engagement both online and off – using the MyBO site to drive involvement and community. I just pulled out of one of my (many) proposals to campaigns from prior to the 2006 elections where I request the candidate and their campaign to:

The goal of any campaign is to convert uninterested persons into avid supporters – developing a relationship with these supporters over the course of the campaign. Migrating supporters along this path is an art, rather than a science – since the details of conversion are often considered nebulous at best (e.g. like his looks, his stance on taxes, his wife’s cookie recipe), but the steps are almost always the same – and evidenced in any involvement effort.


At these events – the two most important actions are the acquisition of email addresses by the staff at the event, the branding of all candidate merchandise with the campaign URL and finally, the candidate mentioning the website URL in his speech and other opportunities.

The conversion ratio (number of emails that become active supporters) is always highest through this method – they have self-selected by coming to the event, and they have expressed an interest by signing the form/giving a business card.

Driving the point home that getting involved with the campaign is all at the website will drive interested activists to the site and signup.

Follow up is key – as with any effort – a thank you note with information regarding the candidate allows the supporter to see the campaign values their time and offers the supporter a chance to “get involved” in other ways. The conversion rate of confirmed supporters goes up with just this simple gesture.

This concept was brought home to me over the years whenever I would see how the people we met at events would be more enthusiastic that the people who just gave their email or money over the Internet. The simple lesson is: if they care enough to spend some of their time to come out to an event, they more than likely will do more for you beyond just listening and cheering.

A chance to build up some “social capital”

Additionally, the article in Rolling Stone discusses the marriage of old-school shoe leather campaigning with “new-era” technology – which can be simply read as opening up the supporter database. To credit David Weinberger with his request from the 2004 Politics Online Conference, he asked why didn’t the Dean Campaign let the grassroots run with the campaign? Because, unlike this cycle, training and organizing of the grassroots was not supported by the campaign.

One of my favorite slogans is “If you can’t beat them, join them.” I would say that David Axelrod took that statement to heart when he combined the organizing talents of Temo Figueroa and the technology of the MyBO platform to create their own campaign communications channel. By training their supporters and leveraging technology, the Obama campaign was able to amplify their efforts and amass a group of supporters and volunteers that were equipped to do the work that paid staffers might.

It has always been my contention that training people to do something on your behalf is imparting wisdom and knowledge that they do not have. And, since they are part of your program – and Democrats to boot – you are building your team, and the future teams to help create a better, stronger effort in the future.

People become loyal, not just because you are a winner, but because you gave to them and they give to you. In the blogosphere parlance, we call that social capital. And that is something hard to “purchase” no matter how much money you have.

Are social networks impacting the election? I STILL say no, but…

It is the techniques of open networks, finding ways of connecting people through means that they have become more familiar with (e.g. Facebook, MySpace and the multitude of social-network, community sites) in searching down people’s profiles and their friends, using search tools to find like-minded individuals AND the cooperation of the campaigns organization team that truly makes the tools and technology of social networks empower the campaign to convert simple supporters to enthusiastic volunteers.

I remember Governor Dean and Joe Trippi saying something to the effect of, “the campaign is not here, it is out there.” Funny thing is, the feedback loop and the respect paid to the supporters and volunteers will pay of in spades. That is social capital that I hope the Democratic Party learns to work with (and not simply take advantage of) in the future.

I truly look forward to see what happens next.