Dear Chelsea, I am sorry it has been a while…

Back in 1997, when I returned to Stanford University, I had a couple of accidential run-ins with a very amazing woman, Chelsea Clinton. Interrupting a meeting with the head of the Stanford Dance Division and Chelsea, inviting her to become part of the Viennese Ball Opening Committee, and then even dancing with her during that same ball – all as a freshman who was astonishingly more mature that any eighteen year old I had ever met. The following year, we even had lunch together, simply because I always felt awkward about having “met Chelsea” without actually knowing her. She was incredibly gracious, and is an incredible person. Our lives have followed parallel paths ever since (she moved to Cambridge around the same time I moved to London, she moved to New York and I followed soon after).

Watching her on the stump for her Mom and remembering the good times that were the Nineties, I think back to the success we had in our lives, with a vision of hope that President Clinton embodied. Fourteen years later, things have changed. And that brings me to my choice of recommendation and a letter:

I am sorry it has been a while since we last spoke, but I have caught wind of you in various places in London, Cambridge and New York – you style has improved with age and you look terrific. You are even more poised and confident that I saw back when you were a Sophomore back in the Cowell Cluster.

I saw the work you were doing at the end of the 2004 Campaign, we almost caught up in Florida when you were with the Kerry kids in Plantation, but I was out pounding the pavement and hanging up door hangers. But this season, I have seen so much of your work, it has been incredible. You are working tirelessly for your Mom and doing a great job. And normally, your recommendation (along with your Mom’s record of success) might tip me into the Clinton Camp for today.

But, after giving it a lot of thought, I am more than likely going to cast my vote for Senator Obama. And there is no better way to sum up my thoughts that what Zephir Teachout has expressed: 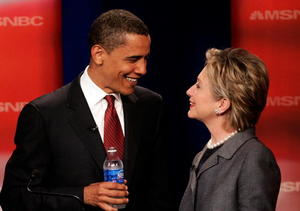 Both Hillary and Obama are smart enough to be President. Both are temperamentally competent to be President. When it comes to past behavior, I have every reason to believe both will support and enable progressive legislation. So for me, the question comes down to moral leadership, the sense of possibility, and international leadership.

I want a President who is an extraordinary foreign leader, Commander-in-Chief, and voice for what is best in America in the world. This is not a question of likeability, but it is a question of character, or the moral spirit that Aristotle called êthikai aretai. Character is different than personality, but a persistent, deeply embedded structurally defining trait, embodied in words like wisdom (instead of intelligence), courage (instead of brashness), an intuitive relationship to justice and fairness. The metaphor of character is not the strength of impenetrable walls, but the strength in resilience, the capacity to maintain judgment and moral reasoning over the battering and humiliations of time.

I support Obama—proudly—because he has that difficult to describe, but not difficult to discern, quality of character. Flowing from this strength, his demands on us, as citizens, are genuine demands, not genuflections. When Clinton says that its “all about you,” she means that she will work tirelessly to take care of us (which I believe she would, or pursue what she believed was the best path). When Obama says its “all about you,” she means that unless we find that 5% of citizen leadership in our own communities, unless we organize to oppose kleptocratic and ogopolistic and environmentally ruinous behavior, we cannot transform this country, and, moreover, we cannot hold our heads high as true, self-governing, citizens.

I want a President who speaks—honestly—to what is best in us as citizens. We can be a stupid bunch, but we are not fools. Dishonest, sophist language—moral language used cynically—will lead us to use moral language cynically. Moral language used honestly, if it reaches just 5% of the population—moral demands on us to organize, empathize, and consider the public good, not just our own good, when making political decisions. Over time, character will out—ours and a candidate’s, and we need someone whose character is not up for grabs.

The image I can’t get out of my head, the image that drives my drives to South Carolina, my contributions, and my phone calls, is the image of Obama as our leader in the world. President Obama will not just speak to Iran, but to Kenya, to Pakistan, to Russia, to Hamas, and to the WTO. He can take on the way the UN is organized, the way we engage in diplomacy, and the scope of possibilities for international cooperation in an increasingly globalized and unequal world.

I know, from everything he has done in Illinois and before, that he is deeply comfortable with that most uncomfortable job of the President; maintaining and projecting moral commitments (not strategic commitments) while engaging with those who are completely opposed to you. When he visited Kenya two years ago—hosted by its leaders—he publicly urged those same leaders to grapple with corruption and ethnic division. With Obama at our head, we can finish the quartet of the American dream—Jefferson for freedom, Lincoln for unity, FDR for international freedom, Obama for international unity.

This is a position I think I could support. Last time around, it was Dean for the heart and Kerry for the head – and we choose JK. While the same could be compared to Obama and your Mom, I think that I could see Obama becoming the person that becomes the President that others envision for the future. Your Mom is absolutely amazing, and I believe that if she wins, she would be an exceptional leader as well.

Like your Dad, back in 1992, I see hope and inspiration when I listen and connected with Senator Obama. He brings that vision of a better tomorrow into view. Starting Day One, I think he will be the best President for these United States.

All my best Chelsea. Hope the hedge fund is not making you have sleepless nights. And say hello to your Mom.